The Blockchain Brief. The week in five headlines 7497

This week’s big winners were Bitcoin Cash and Bitcoin Gold, which went up 19% and 20%, respectively. Bitcoin sits relatively still (in Bitcoin terms) around $6,700, and Ether, which seemed to surge, has quieted down. Litecoin is doing very well for reasons that the market only knows, since no innovation is moving the needle in its case. Dash is down 5%, but all in all, the market gods are content. 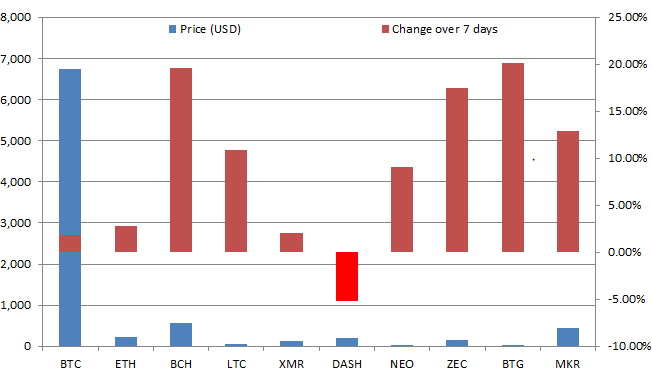 Walmart to track lettuce on the blockchain

After a bout of notorious E. coli contaminations earlier this year, Walmart has decided to make it official and push ahead its IBM blockchain partnership. While it looks deceptively simple and lends itself to silly headlines, the project is actually a massive step forward in supply-chain management. It will require suppliers (over 100 farmers, in this case) to sign off when they receive the produce and when they move it along the supply chain. The detailed data entered at every step will allow comprehensive labeling and tracking of leafy greens on a distributed, decentralized ledger.

Google reverses ban on crypto ads in US and Japan

In a statement that is short and very much to the point, Google says its Ads policy “will be updated in October 2018 to allow regulated cryptocurrency exchanges to advertise in the United States and Japan.” Regulated exchanges only, then, and only with Google’s express certification.

The laxer ads policy falls in line with a tendency to give more leeway to regulated exchanges in both the US and Japan. Both Japan and the United States are attempting to regulate the market to offer stronger customer and investor protection and tackle dubious trading practices.

Eyes on the Circle

Another stablecoin hit the market earlier this week. USD Coin has the outstanding merit of being backed by the likes of Goldman Sachs, Baidu and Bitmain, and partnering with CENTRE, the “consortium” that is attempting to become an open-source “network scheme for fiat token stablecoins that will allow money to flow between wallets the same way information moves between web browsers and servers”. USDC is CENTRE’s first stablecoin (that is, 1 USDC = 1 USD), but not its last. The launch comes on the heels of Paxos and Gemini, two stablecoins that seem to be doing relatively well.

Europe is a good place to be for crypto fans

Malta and Switzerland are already known to be crypto havens, with Malta hosting the Blockchain Summit in early November and Switzerland’s SEBA Crypto attempting to become the world’s first regulatory bank to let customers trade fiat to cryptocurrencies. Friendly governments and clear regulations make for a very dynamic environment, and this week brought more proof that Europe is a good place to be if crypto is your game

Italy is now the 27th country to sign the Declaration creating a European Blockchain Partnership. The Italian Minister of Economic Development, Labour and Social Policies signed on Italy’s support to “the delivery of truly cross-border blockchain-based digital public services”, helping “overcome obstacles for spreading the use of innovative digital solutions across the EU”.